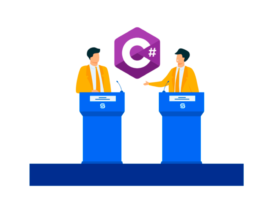 It’s November already! After months of rumors, speculations, and so on, Microsoft will finally reveal .NET 6 at .NET Conf next week.

This release includes lots of new features as well as speed and efficiency enhancements.

Let’s take a closer look at The 5 Most Important .NET 6 Features.

Right now, C# 10 It is regarded by Microsoft as one of the most critical components of .NET 6. C# 10 is mostly an extension of what currently existing, both in terms of concepts and capabilities and features, registries, or patterns.

To summarize a little what brings C# 10, the global using, the namespaces with file scope and more very good characteristics that will allow to simplify the code and to write less repetitions.

Finally, registry structs are supported in the C# 10 version. To understand this new feature, compare it to the records in the C# 9 version (class-based), but with a few modifications.

The most significant change is the addition of registry structs for completeness, so that structs can enjoy the same registry benefits as classes.

But that’s not all, Microsoft did not only limit itself to struct records, but also, they decided to align class records as much as struct records with ValueTuple.

The result of this?

In Microsoft’s own words:

“…In other words, the choice between classes and structs must be made before choosing to use registers…”

What better way to explain the theory than to look at a real example? Let’s get started:

And that’s what the code would yield if it were run:

You’ll see that it’s quite close to the record example in C# 9:

To reiterate, the key differentiating characteristic of record struct properties (apart from the record struct syntax) is that they are modifiable.

What are the main differences between struct records and class records?

Perfect, but, as already mentioned…

To summarize, the using directive imports all types from a single namespace, as shown in the following example:

You can now specify that all subsequent defined declarations are members of the declared namespace using the new namespace declaration form:

The improved syntax, which will be included in C# 10, will save both vertical and horizontal space for the most popular namespace declarations.

Strings that have been interpolated can now be assigned to const variables. These interpolated strings are simple to understand and apply. They should be usable in any situation. They can now be combined with const if the placeholder values are likewise const.

You may now reference nested fields using a property pattern. This is the finest example (before) to comprehend it:

And now it can be done perfectly well like this :

You can see this more compact form used in the following example by Microsoft taken from RC 2 of .NET 6, for example with Reading.PM25 :

The features have been added of .NET 6 are numerous; however, the majority of them have yet to be fully utilized (despite the fact that this is the RC 2 Preview), and we will have to wait for Microsoft to discuss them in detail in the not-too-distant long term, as we are only a few days away from the official release the next week.

“It’s inspiring to see the new features in .NET 6 that will lay the foundation for what’s coming next. These are big-bet features that will push the platform forward in both obvious and non-obvious ways.”