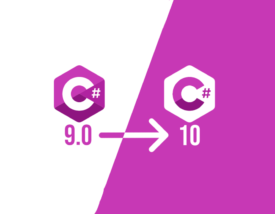 With only two months left until the official release of C# 10 and Microsoft has opened a discussion about the new features and functions of the tenth version of its C# language. These enhancements are those announced in C# 10.0 Preview 7.

Now in C# 10.0 version, you have the ability to add the sealed modifier when you override ToString in a record type.

Microsoft advises us that this feature requires setting the <LangVersion> element in the csproj file to preview.

What is the Record Keyword?

If you don’t know what I’m talking about, this is normally used to define a reference type that provides built-in functionality for encapsulating data.

This new syntax, which will be implemented in the new version of C# 10, will save both vertical and horizontal space for the most common namespace declarations.

What is namespace keyword?

To clarify this, the namespace keyword is used to declare a scope that contains a set of related objects. You can use a namespace to organize code elements and to create globally unique types.

What are file-scope namespace declarations?

These declarations in particular, allow you to declare all the types of a file, which are in a single namespace.

To go a little deeper, in this version of C# 10.0, the example is similar to the previous one that has been shown by Microsoft, but uses a file scope namespace declaration 👇

To understand the Constant interpolated strings, first we need to understand String Interpolation.

When an interpolated string is resolved to a result string, items with interpolation expressions are replaced by the string representations of the expression results.

Perfect, now my question is….

What Constant interpolated strings have in C# 10?

String interpolations can create more readable const strings as the const strings used in the application are constructed. Placeholder expressions cannot be numeric constants because those constants are converted to strings at runtime. The culture currently in place, could affect the string representation.

First, I will explain what are the Extended property patterns. These patterns allow you to have property subpatterns refer to nested members, for example:

Now that this has been clarified….

What Extended Property Patterns have in C# 10?

The next functionality that Microsoft discusses is that nested fields or properties could be referenced within a property pattern. The example Microsoft gives is a pattern of the form 👇

Microsoft tells us that it will be valid in C# 10.0 and later, and that this is equivalent to 👇

And this is valid in C# version 8.0 and all subsequent versions

Declaration and assignment in same deconstruction

This new change implemented by the new version, allows to remove the restriction of previous versions of C#. The example that Microsoft gives us in this case is 👇

…Previously, a deconstruction could assign all values to existing variables, or initialize newly declared variables:

Perfect, but as before…

To summarize, the using directive imports all types from a single namespace, as shown in the following example 👇