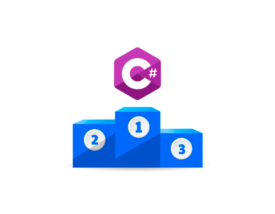 C# could make history: Although it has always been in the top, it has never managed to stay with the top one, but apparently Microsoft is going to do everything in its power to make this happen.

Today it is one of the most popular programming languages in the world and this would never have been possible without its main creator: Anders Hejlsberg. Will this be the year that his dream comes true? Will C# reach the podium with a gold medal? Let’s discover it! But first, let’s understand a little about how all this came about.

Let’s talk a little bit about the beginnings of C#

Before we get to the point we all want to get to, I’d like to start at the beginning: The story of Anders Hejlsberg and his great creation: C# (also written as c sharp).

Anders Hejlsberg was born in 1960 in Copenhagen (Denmark). His great passion for programming took him very high: He managed to reach an agreement with Philippe Kahn — the founder of Borland — to sell him his Pascal compiler that he himself had created for personal computers.

At the time, his company was doing very well, until he realized that his revenues were not going well. So he decided to move to California to start his new job, which would lead him to success: He became Borland’s chief engineer.

At that time — between 1989 and 1996 to be more precise — Anders Hejlsberg dedicated himself to improving Turbo Pascal and later, he became the leader of his Turbo Pascal’s replacement: Delphi. Everything went so well that he had to leave Borland because of a very big proposal from Microsoft.

With the passage of time he managed to become the chief designer of a new programming language. Yes, C#.

This is a common question. If you are wondering if C# is popular, yes, c# is very popular. In fact it is currently the fifth most popular and relevant language worldwide according to Tiobe Index ranking.

Its great popularity has been built on a solid foundation of more than two decades. Thanks to Microsoft and the entire .NET Framework community, C# is today a popular choice when it comes to choosing a programming language to develop from desktop applications (Windows, macOS and Linux), to mobile applications (Android, iOs, Windows Phone) to web applications and games with the Unity engine.

If you are wondering if C# is more popular than Java, let me tell you that it is not (as of today). According to the Tiobe index ranking, Java programming language is in the third position of the top, followed by C++ (fourth position) and C# (fifth position). Python still on the first position of the ranking.

Both languages are equally easy to use to a greater or lesser extent (there are programming languages much more difficult to learn and use). Also C# and Java have a very big and strong support community.

I personally think that one of the things that most influences the future of a programming language is the developer community behind it.

Why C# is popular?

The popularity of C# is due to several reasons. The main one (as I mentioned before) is the community of developers and support for C# and the .NET framework in general. Being open-source makes it very easy to collaborate with other contributing developers. Moreover, you can even see at any time you want what new features are being developed on GitHub!

Also C# has gained popularity for video game development. Thanks to the Unity game engine, you can develop games using C# and today, more than a third of the top games are made with Unity (also Metaverses).

Unity is a modern game engine that currently has more than 770 million active users on games created with the Unity engine.

Another big reason why the object-oriented language C# continues to gain popularity is thanks to Microsoft and the constant updates of new features.

The stack of products that Microsoft is building on its platform is incredible (even though a few years ago we wished it was better). Microsoft is also slowly getting into the world of Machine Learning and that at some point, more in the next few years, will be wonderful.

Currently, C# has become one of Microsoft’s most successful languages and widely used, with wide adoption among professional developers. Although it is not the most popular — for the moment — it’s ranked among the most popular programming languages, behind Python and C++. One benefit to C# is that it can be used to create applications on both mobile and computer devices. The open-source community also uses it frequently to build software applications using different kinds of frameworks such as Mono and .NET Framework.

C# is increasingly used in the enterprise world, and everything Microsoft is doing with it is starting to pay off. Let’s take a look at what and why C# has a good chance of being crowned the most popular programming language of 2022.

This is what we are all wondering at this very moment: Will this be the year of C#? The year it becomes the most popular programming language in the world? Let’s start going deeper:

The TIOBE index (The Importance of Being Honest) is a monthly report on the popularity of programming languages, originally created by TIOBE Software BV.

This index, in case you are wondering, is based on an algorithm that analyzes the number of queries in almost all search engines worldwide. With the data it obtains, TIOBE is able to rank the popularity of programming languages.

As a disclaimer, this ranking is never based on the versatility, power or quality of the programming language. It is simply based on the number of searches and from there, it ranks them from the most used to those that are not so widely used.

👀 Info: If you are interested in discovering how the algorithm works on search engines, I invite you to take a look at: TIOBE Index Definition

Will C# become the programming language of the year?

If we go back a few years, Tiobe showed that C# had jumped to number 5 in January 2013. That’s impressive considering that it came in at number 23 just a year earlier. But now, C# has the largest 12-month gain in popularity terms.

However, C# in the last month has increased by 2.21%, which puts it well ahead of the other languages.

“…At the moment, C# is by far the most likely candidate for this title…”

And then he added:

“It is interesting to note that C# has never won the TIOBE index programming language of the year award during its 21 years of existence, although it has been in the top 10 for the last 2 decades. Let’s see what happens next month!”

As for job openings for C# developers, demand continues to increase. This should be an important indicator if you want to learn C# (yes, C# is a language that can be learned by beginners too).

C# skills are well paid if we talk about salary or money.

There is no doubt that Microsoft is putting all its time and effort into C#. If we go back a couple of months ago (November 2021), after many months of Previews, speculations and leaks, Microsoft officially released the new version of its Framework: .NET 6. This release was accompanied by the announcement of Visual Studio 2022.

Currently Microsoft is still working hard on the entire .NET Framework and a few days ago we already saw the first preview of this new year of the next candidate to replace Xamarin: .NET MAUI.

C# is not really losing popularity. It is true that a couple of years ago it had a greater popularity than it has today but thanks to all that Microsoft is doing for it, its popularity is increasing. So yes, you could say that C# is a programming language that has kept up very well over time.

We expect the release of .NET MAUI by the end of this year — apart from the fact that we have already seen quite a lot of news from C#11. It seems that Microsoft wants to reach the top of the podium this year.

How about you? Do you think C# will achieve the title of the most popular programming language this year?