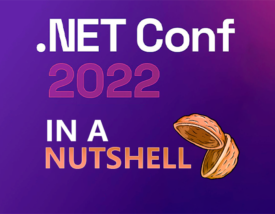 Microsoft has teamed up with various venues across the country to host .NET Conf Live Stream events!

In this article, I am going to give you the summary information (of the most important parts) that you need to know. At the end you will be able to say that if you have seen the .NET Conf (wink wink😉) . Join us as we learn about .NET 7, C# 11, .NET MAUI, Visual Studio and more together!

Before we start the summary by going into the different topics that were discussed at the November 8–10 .NET Conf, let’s quickly look at some highlights that I think .NET developers should know about and be proud of what is being achieved!

On the first day of the event they revealed a series of amazing highlights and the first of them has to do with the rapid adoption of .NET 6 versus its predecessor .NET 5 (an incredible +1.8x) with almost 6M active users. Fascinating, isn’t it?

At this very moment it was also revealed that .NET remains the TOP 1 most loved frameworks between 2019 and 2022 (that’s already 4 years!). And little to say about C#, which to this day remains one of the top 5 fastest languages on Github.

Moving on to our .NET developer community (yes, it’s ours! Both you and I are part of this amazing community!), the numbers reveal that almost 50K members have contributed to .NET. 50,000 members! Do you get the idea of what is being achieved? As you can see I am very excited.🥳

Well, now that we’ve done a little review of the important general data of the event, let’s move on to the heavyweights.

After the intro made with the higlights, at the .NET Conf they went on to reveal some numbers about .NET 7 and the changes presented compared to previous versions.

First of all we talk about what has been the most talked about in these months about .NET 7, yes, performance.

We start with the incredible figure that more than 1,000 performance improvements have been made in .NET 7:

And yes developers, we are in front of the fastest .NET ever seen.

Following the theme of performance in .NET 7, now it was the turn of the APIs, again surprising us all by their high numbers.

At first they showed that the performance improvement of the .NET 7 APIs compared to version 6 is up to 16% faster (reaching up to 25% extra in requests per second in applications such as Fortunes).

But they not only compared it to its previous version. Also the performance of .NET 7 APIs has been compared to its rivals; Node.js and Java Servlet.

As you yourself have just seen, the performance of the APIs is huge (up to 7.02M requests per second) compared to its rivals:

Another point discussed was the performance of the rest APIs comparing gRPC against its rivals, again, beating them by a considerable margin reaching up to 99.8K requests per second.

Taking these data into account, we can conclude that the performance is:

It is true that we have been hearing things about minimal APIs for a couple of weeks but I know that maybe some of you don’t know what I’m talking about. Microsoft has been working on super simple APIs to start working on them and with a huge scalability.

As Gaurav Seth, director of PM for .NET, told us in his presentation:

“We are focused on ensuring everyone can build amazing APIs with .NET quiclky and scale to add powerful features as they need them.”

Let’s quickly move on to another heavyweight that has also been talked about a lot these past few months, Blazor in .NET 7.

We came to perhaps one of the most important points of this conference, the eleventh version of the C# programming language.

In their introduction they told us how the development of C# 11 was structured and organized, and later they began to comment on the different features that this new version brought with it.

If it is true that we have been hearing about these features in recent months, there is not much that we do not know.

In this occasion, apart from the video, I would like to leave the post of Oleg Kyrylchuk, .NET Developer, blogger and Microsoft MVP, and about these C# 11 features.

His explanation is very clear and straight to the point, highly recommended and short reading:

This presentation was given by Steven Sanderson, Developer and Architect at Microsoft. He talked about the Roadmap of Blazor releases (which you may already know a bit about how they work).

The most notable thing that Steven commented is that Blazor’s development over the first few months has focused primarily on .NET MAUI:

“…the new Blazor Hybrid feature that allows you to run your Blazor components within a native mobile or desktop application.”

On the other hand, Steven comments that in the last few months development focused on adding new features to Blazor in .NET 7:

As Steven said in his presentation:

“… most of them work across all the different Blazor hosting models so, whether you’re using Blazor Server or WebAssembly or Hybrid with .NET MAUI, most of these features will work in the same way across all of them.”

We go into the new features that .NET 7 brings with Azure. For this, Mélony Qin explains that Azure Functions already has support for .NET 7:

“We also made .NET Framework supported in our Functions before host a few weeks back”

At this point you may be wondering what are Azure Functions?

To understand it well, let’s assume a scenario where you are a .NET developer (maybe you already are😎) and to start a project you need to set up dependencies and configurations before you start.

This introduction alone is enough for you to understand what Azure Functions does: it provides you with a ready-to-code environment.

“…Instead of worrying about deploying and maintaining servers, the cloud infrastructure provides all the up-to-date resources needed to keep your applications running.”

We come to another interesting topic, the severles containers for microservices. This time we have Anthony Chu, Product manager working on Azure Container Apps:

At the beginning of the presentation, Anthony commented that Azure Container Apps is a new Azure service that came out only half a year ago.

“…allows you to build serverless containers for microservices.”

That is why this new feature of Azure will facilitate the creation of containers in a very simple way so that developers can focus 100% on development.

And this was later affirmed by Anthony:

“…you can focus a lot more on building your app and not have to worry about managing any infrastructure.”

At the time, when I heard that I wondered, what can I really build with Azure Container Apps?

If that’s something you’re wondering right now too, you’re in luck because Anthony has provided a direct answer to that question:

In the image you can see graphically how this works. He also added:

“All applications that you deploy to an environment, share the same virtual network and you can also configure them to use the same logging and observability as well.”

Firstly, they expressed their happiness because the adoption of .NET MAUI has been spectacular: Azure Container Apps with .NET | .NET Conf 2022

The graph shows the number of stars on Github and it is that, at the moment, the difference between dotnet/core and dotnet/maui is barely 1K stars having a difference of about 5 years!

Obviously, like all the talk about .NET 7, which is all about performance, .NET MAUI is no slouch with improvements of up to 51% faster rendering.

The comparison table shows this data (tested on a Pixel 5):

I’m very sure you’ll be asking me at this point:

What the fvck is the LOLs/sec?

Well then, it has an explanation but before you figure it out, I want to ask you to comment “LOL” if you have really asked yourself that question.

I want to see a lot of LOLs to know how many people have really wondered about this!

The explanation for this… Well, you’d better read this excerpt from .NET 7 Performance Improvements in .NET MAUI:

Yes, they used LOLs on the screen for testing:

Did you know this benchmarking technique before? At least I didn’t.

Finally, David showed the roadmap for the release and support for .NET MAUI and one of the things to highlight in this roadmap is that support for the Xamarin SDKs will end in May 2024.