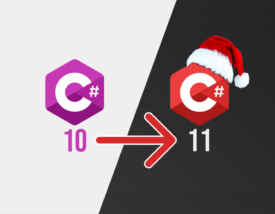 It’s already the end of 2021 (I’m still digesting 2019) and I think we would all agree that it has been a very intense and full year, such as the release of C# 10, .NET 6 and many more things. But what’s this about C# 11 features coming out already? Wasn’t it that Microsoft released C# 10 a month ago?

Is Microsoft really preparing an amazing gift for all C# developers? C# 11 as a gift this Christmas? If this is true, let’s see in advance the features that we will find in C# 11.

I already talked about the features of C# 10, but just to refresh your memory, some of the features that are available in C# 10 are:

These features, which were implemented in C# 10, greatly improved the performance of applications, in turn reducing development costs and time.

But let’s see what’s going on these days with C# 11 and why it’s being talked about so much.

As many of us already know, Microsoft released C#10 at the beginning of November, bringing with it many new innovative features making C# a much more versatile language. But since a couple of days ago rumors about C#11 have started to spread in the networks and its possible features have been published in a Reddit thread which makes mention of an changelog in Microsoft’s official Github. The features seem very interesting and curious, so let’s analyze them:

This is the first feature talked about in one of the first C# issues on GitHub. Microsoft has had a couple of issues with this promising feature as it encountered some incompatibilities with other tools at the last minute (including crashes and problems compiling). For this reason Microsoft did not officially release this feature in C# 10, but in a preview. Let’s see how it works:

As Ashmind has explained with his words in his Proposal:

“For some attributes (e.g. TypeConverterAttribute) that are used to reference types, the current usage looks like this:”

According to him, this problem has 2 disadvantages:

Ashmind suggested that the generic attributes should be supported, including any generic constraints. Followed by an example:

This very good proposal you suggest has a couple of advantages. In his own words:

The favorite feature of many C# developers. We have been analyzing this feature in the previews of C# 10 but it was not officially released (according to Microsoft) due to lack of time, but it seems that they are convinced that in C# 11 it will be released and we will be able to use it with enthusiasm.

“Create auto-properties that can also have getters and setters. These can access the automatically created backing field with the field keyword, that acts like a variable, as value does for properties.”

Below, Lachbaer explains how this feature works with a very simple example:

A semi-auto-property with an automatic backing-field is created under the follwing cases:

The setter defines a constraint. field represents the automatically created backing field. As possible with auto-properties, the backing field is initialized by = "".

In my opinion it is one of the most promising features and the most awaited by all developers in C# 10. It is not known exactly when it will be officially released but we will follow it closely.

Let’s take a look at Microsoft’s textual words on why this feature has not been released in C# 10:

“We have a syntactic design and semantic design for arrays and indexable types, but we will need to some more work for IEnumerable support. We hope to have an initial preview soon into the C# 11 development cycle to help get user feedback on the design choices we’ve made so far.”

List Patterns is a feature suggested by Alrz and is detailed in this way:

“Lets you to match an array or a list with a sequence of patterns e.g. array is {1, 2, 3} will match an integer array of the length three with 1, 2, 3 as its elements, respectively.”

To understand this better, let’s look at part of the example he used:

You can see the complete example and more information in the List Patterns proposal on GitHub.

According to MadsTorgersen — the contributor to this proposal — specifying abstract static members in an interface obligates the classes and structs that implement the interface to include those members, either explicitly or implicitly, in their implementations of the interface in question. It is possible to get access to the members by specifying type parameters that are not prohibited by the interface’s restrictions.

The inability to abstract over static members and build generic code that works across types that specify those static members is a major limitation of the present state of the art. This is especially troublesome for member types that only exist in a static form, such as operators, which are particularly difficult to deal with.

Static abstracts in interfaces allows generic algorithms over numeric types to be implemented, which are represented by interface constraints that indicate the existence of certain operators. As a result, the algorithms may be stated in terms of the following operators:

You can see the complete example and more information in the Static abstracts in interfaces proposal on GitHub.

MadsTorgesen has also proposed a couple of alternatives, such as Structural constraint:

“An alternative approach would be to have “structural constraints” directly and explicitly requiring the presence of specific operators on a type parameter. The drawbacks of that are:”

Declarations under or patterns

This is a feature suggested again by Alrz and is detailed in this way:

“Allow pattern variables to be declared in different mutually exclusive patterns. This is the part of pattern-matching proposal that did not make it into C# 9.0.”

If each mutually exclusive pattern creates a different set of variables with different types, then the variables will not be firmly assigned in that specific code path, which is what is desired. This contains the or patterns, as well as each occurrence of a switch section, among other things.

A pattern variable may be definitively assigned in a whenclause but not in the body of a switch section, for example, as a result of this:

Pattern variables may be defined on both sides of the equation in a recursive way by multiplying them together as follows:

Again, I recommend reading the Declarations Under or Patterns Proposal in depth on GitHub if you want to know it perfectly.

C# 11 at Christmas? I think it will simply be a dream that may come true (it is not the first time that Microsoft works in silence), although seeing all the features that were released in C# 10, it looks unlikely. Anyway, we’ll find out in the next few days.

What about you? My dear reader? What do you think will happen with C# 11? Let me know! I would like to know your opinion too 🙂

If you liked this article, don’t forget to FOLLOW US, so that you can be one of the first to read what’s new in .NET.