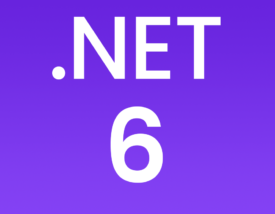 After so many months of speculation, leaks, and previews, Microsoft officially releases .NET 6 RC1. This is the first of the 2 versions that “go live” and are supported in production.

This release brings many new features, both new features and performance and optimization improvements. We are going to see The 5 Most Important .NET 6 Features.

What is .NET in general, is a Microsoft platform to develop Software, covering many operating systems such as Windows, iOS, Linux, Android … The main idea of ​​.NET is to be able to develop applications independent of the physical architecture or the operating system in the one that was going to be executed.
Its main advantages are:

.NET 6 is the new version of .NET (currently .NET 5) that Microsoft promises to release in November 2021. It brings many improvements and new features compared to .NET 5.

This new version of .NET 6 can be downloaded right now for Windows, Linux and MacOS.

As we have discussed before, .NET 6 has been officially released in November 2021 and will be supported for 3 years. Microsoft promises that .NET 6 will be a big change from .NET 5.

The additions that Microsoft promises to bring are:

Microsoft claims that .NET 6 performance will be much higher than .NET 5. That is very likely since we have seen how in the jumps of its previous versions the performance has been increased at the same time that the memory consumption has been reduced.

They also promise to increase the performance of tools and services to ensure that .NET developers are as productive as possible. Below we can see some of the first performance tests.

If we speak in general, we can speak from .NET MAUI, through the new implementation of the 64-bit architecture, to Visual Studio 2022 and its function more… 😎 But we are going to explain the most important ones and the ones you should know.

This release includes lots of new features as well as speed and efficiency enhancements.

Profile-guided optimization (PGO) is one of the most important capabilities for the vast majority of development platforms that exist today. This novelty is based on assuming that the code that is executed at the beginning is (often) uniform, which can lead to a much better performance if it is exploited.

The number of PGO possibilities is enormous, the most important of which are:

That rebuild is because PGO has been used in .NET for 20 years and from the beginning, that system was very difficult to use (apart from being proprietary). This has been the main reason why almost Microsoft team don’t used it despite the great benefit it generated. (This change has been primarily initiated by the new Crossgen2 technology).

The main reasons to enable PGO are:

Right now Dynamic PGO is available and enabled with the following environment variables:

The main utilities of Dynamic PGO are:

As we have already talked a bit about Crossgen2, it is a big step forward for early build for the platform. The most important feature is that the goal of Crossgen2 is to be a standalone compiler.

To understand this we are going to go to Crossgen1, which was simply a separate compilation of the runtime with only the necessary components to allow the generation of code. That approach that was given at the time generated many problems.

Today, Crossgen generates R2R code for all methods in an assembly (this includes the SDK and runtime). The problem with this is that it is a waste, since most likely more than half of them would be better left at runtime.

To go back in time, in .NET Core 3.0 it was used to remove about 10MB from the Linux runtime distribution. Now Microsoft will try to identify much more than 10MB in .NET 7.

This Intel technology is a security feature available on most newer processors, both from Intel and AMD. Adds hardware features that protect against the most common types of flow control hijack attacks.

With CET shadow stacks, the operating system and processor can trace the control flow calls and returns in a thread in the shadow stack in addition to the data stack, and thus be able to detect unintended changes in the flow of control. . The shadow stack is protected from memory accesses by application code and helps defend against attacks involving return-oriented programming (ROP).

This is the new version of HTTP. It brings many new features and performance features compared to previous versions of HTTP by using the new connection protocol: QUIC.

QUIC uses UDP and has integrated TLS, this allows to establish connections much faster. Unlike TPC, QUIC connections are independent of IP address, this allows mobile clients to move between mobile data and Wi-Fi networks maintaining the same logical connection and thus be able to continue with long downloads.

Of course, .NET 6 doesn’t include support for HTTP/3 for macOS, mainly due to the lack of a TLS API that is compatible with QUIC.

Right now, C# 10 It is regarded by Microsoft as one of the most critical components of .NET 6. C# 10 is mostly an extension of what currently existing, both in terms of concepts and capabilities and features, registries, or patterns.

To summarize a little what brings C# 10, the global using, the namespaces with file scope and more very good characteristics that will allow to simplify the code and to write less repetitions.

Finally, registry structs are supported in the C# 10 version. To understand this new feature, compare it to the records in the C# 9 version (class-based), but with a few modifications.

The most significant change is the addition of registry structs for completeness, so that structs can enjoy the same registry benefits as classes.

But that’s not all, Microsoft did not only limit itself to struct records, but also, they decided to align class records as much as struct records with ValueTuple.

The result of this?

In Microsoft’s own words:

“…In other words, the choice between classes and structs must be made before choosing to use registers…”

What better way to explain the theory than to look at a real example? Let’s get started:

And that’s what the code would yield if it were run:

You’ll see that it’s quite close to the record example in C# 9:

To reiterate, the key differentiating characteristic of record struct properties (apart from the record struct syntax) is that they are modifiable.

What are the main differences between struct records and Class records?

Perfect, but, as already mentioned…

To summarize, the using directive imports all types from a single namespace, as shown in the following example:

You can now specify that all subsequent defined declarations are members of the declared namespace using the new namespace declaration form:

The improved syntax, which will be included in C# 10, will save both vertical and horizontal space for the most popular namespace declarations.

Strings that have been interpolated can now be assigned to const variables. These interpolated strings are simple to understand and apply. They should be usable in any situation. They can now be combined with const if the placeholder values are likewise const.

You may now reference nested fields using a property pattern. This is the finest example (before) to comprehend it:

And now it can be done perfectly well like this :

You can see this more compact form used in the following example by Microsoft taken from RC 2 of .NET 6, for example with Reading.PM25 :

Package validation tools will allow NuGet library developers to validate that their packages are consistent and well-formed.

Its main characteristics are:

Workload Enhancements in the .NET SDK

Microsoft reports that it has added new workload commands in .NET 6 to improve administration:

Crossgen allows IL precompiling into native code as a publishing step. Pre-compiling is primarily beneficial to improve startup. Crossgen2 is a scratch implementation that is already proving to be a superior platform for code generation innovation.

Here we can see how to enable the pre-compilation with Crossgen2 from the MSBuild properties:

Already with .NET 6 you can set a default font for an Application.SetDefaultFontapplication. Also the pattern it uses is similar to setting high dpi or visual styles. An example:

Here are 2 examples after you set the default font.

Performance increase in the BigInteger library

BigIntegers parsing of decimal and hexadecimal strings has been improved. In the following photo you can see improvements of up to 89%:

The graph below shows part of an iOS startup CPU sampling session seen in SpeedScope:

The news and features of .NET 6 are many, most of them have not been fully exploited and we will have to wait for Microsoft to discuss them in depth in the not too distant future.

“It’s inspiring to see the new features in .NET 6 that will lay the foundation for what’s coming next. These are big-bet features that will push the platform forward in both obvious and non-obvious ways.”