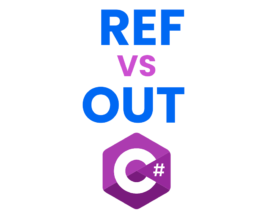 If you’ve ever written code in C#, chances are you have come across the ref and out keywords, but what exactly do they mean? Both of these keywords are used to pass data from one function or method to another.

What is the difference between Ref and Out C#?

To start analyzing the differences between the two keywords, the ref keyword is used to pass a variable by reference. This means that the variable can be modified inside of the method.

The out keyword is also used to pass a variable by reference, but the variable does not have to be initialized before it is passed into the method. Additionally, the out keyword can only be used on variables that are declared inside of the method.

I felt it necessary to make this small nuance or spoiler before going into depth because I wanted to make clear the differences between the two in general terms. Let’s go straight to understanding each one separately.

What is Ref keyword in C#?

Ref is a keyword that indicates when a variable is an alias of another object or reference. These are the 5 scenarios (according to Microsoft) in which the keyword ref is used:

If you are wondering how to use ref, we must use the keyword ref explicitly for the method and for its (the method’s) definition. Let’s see an example from Microsoft:

Although it is true that the arguments of the out parameters do not have to be explicitly initialized before passing them, we must take into account that in the case of passing an argument to a ref parameter, this must be previously initialized.

What is Out keyword in C#?

It is generally used in methods that must return several values, although this parameter does not pass the property.

To use this parameter we must explicitly use the keyword out when defining the method and also in the called method. Let’s look at the example:

The main difference between the two keywords is that ref requires the variable to be initialized before it is passed into the method, while out does not. Additionally, out can only be used on variables declared inside the method.

Main out and ref differences in C#

Now that the function of each keyword is clear, let’s look at the differences between the two:

Why is one better than the other?

There is no clear advantage of using ref over out, or vice versa. It really depends on the situation and what you are trying to achieve with your code. In general:

What are the benefits of using Ref?

Although some benefit we have seen a moment ago, let’s do a recap here of the ref keyword:

Another benefit of using ref is that it can improve the performance of your code. When you pass a variable by reference, the method can access the variable directly, instead of having to make a copy of the variable. This can save time and memory, especially if the variable is large.

What are the benefits of using Out?

There are also several benefits of using the out keyword:

Another benefit of using out is that it can help reduce the amount of code you need to write. For example, if you have a method that needs to return two values, you can use out to return both values without having to create a separate method for each value.