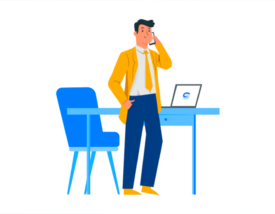 Does WannaCry sound to you? Ryuk? CryptoLocker? These are one of the millions of cyberattacks that occur every day, every hour, every minute. Among ONLY the 3 mentioned, the economic loss is around $200 Million.

What is business cybersecurity?

This examples are only the tip of the iceberg, with the arrival of the pandemic, millions of companies had to adapt to the circumstances and accelerate their digitization processes. After a year and a half of pandemic, thousands of companies continue to prefer telecommuting, becoming possible victims of cybercriminals. Most of them for some reason still do not invest in improving cybersecurity and this becomes an easy target for any attacker.

How do you know if a company is vulnerable to a cyber attack?

The problem begins when a company believes that being small, it is not a target of a cybercriminal. That is the first and most serious mistake since you don’t have to be a large company, simply having a digital presence is enough to add yourself to the list of victims of an attacker. That is why these small companies do not invest in cybersecurity and this makes them the most vulnerable to attacks. When you least expect it is when you receive a cyberattack, which according to IBM, can cause losses between 2,000 and 50,000 dollars, reaching a chilling figure of 3.6 million dollars.

And not only monetary loss, but it can also cause a recovery time of up to 50 days in which the entire operation of the company would be paralyzed. And we have not yet reached the worst: causing the bankruptcy of a company.

How much has cybersecurity cost in these years?

According to Cybersecurityventures, most companies increase their cybersecurity budget in a linear fashion, while cyber attacks increase exponentially. In the U.S. alone, there are more than 30 million small businesses that are exposed to cyberattacks.

The whole world has a prediction of storing more than 200 zettabytes of data by 2025. This includes sensitive and confidential data stored in companies and businesses, in public services and also in everyday IoT devices (smartphones, laptops, routers, NAS … ).

All kinds of devices, means of transport, cities … each time they become more intelligent and autonomous. These devices are used to automate tasks in manufacturing and transportation plants. They will need less and less human supervision and less full-time connection. This will have an impact on latency, connection availability, and security issues.

The latency problem is caused by having to talk to centralized cloud services, which can take longer than ideal for real-time systems to react to things that happen in the physical world.

And the more you’re connected and interacting with external services, the greater your security exposure to attacks. As such, we will see more smart systems that can run on their own, using connections primarily for remote monitoring.

Another even bigger problem is the software that is used in these intelligent and autonomous processes. When asking more than 1000 developers of Enterprise and Production Software, 92% answered that they did not protect their software in any way. Of which 74% acknowledged not having any security knowledge of their software.

Do you have to protect the Software?

More than 100 developers responded that they did not see any type of direct danger by not protecting their applications, since supposedly that Software would be used only by authorized personnel and with controlled security conditions.

These applications being not protected in any way, end up being the most vulnerable to reverse engineering attacks as we saw in the article “How to decompile an application easily”, this Software can be modified in a matter of seconds and can endanger intellectual property of the company, confidential information and customer data of a sensitive nature. Similarly, modifying this software could affect its operation, bypassing authentication and licensing systems.

The United States has a total cybersecurity power of nearly 925,000 people, and there are currently nearly 510,000 job openings, according to Cyber ​​Seek, a project supported by the National Initiative for Cybersecurity Education (NICE), a program of the National Standards Institute. and Technology (NIST) at the United States Department of Commerce.